Our route this leg.

After packing in the last things into Trusty (forgetting a lot of the things we wanted) and casting our moorings for the las time this year in Stenungsund we pointed our bow to the west (at least after stopping by to refill our gas for our gas stove, the nice one I installed earlier) and headed out to Mollösund for diesel and meeting up with S/Y Momo and Håkan who is going to sail with us through the British isles at least. Lasse, Trustys owner jumped to the more comfortable Momo and we were off towards the North Sea. 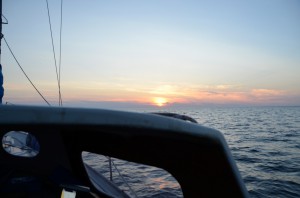 Off into the sunset.

After a bit of sail/rigging problems that had to be solved (remember to always check everything before setting out on a long journey right?) we sailed out into the sunset and the sun was shining and the mood was great. The first night was good sailing and our Aries wind rudder did the hard work. We cooked dinner and settled in for the night (doing our 4 hour watches) witch except for a couple of fishing vessels were quite uneventful. When the dawn and sun came, the wind left, it probably had something more important to do right then. Well so then we started our Iron genua (aka. engine) and just worked our west. 265 degrees have been the compass direction of the week with a +/- 10 difference. We motored and did some chores while letting the nautical miles just pass by.
In some norwegian tv commercials Lindenes look huge but when passing it in the sunset it looked quite small and boring. Not that it wasn’t beautiful but in my mind it would be like passing cape horn or something. 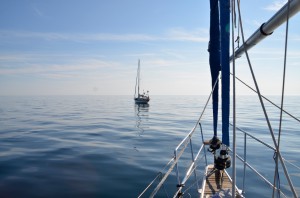 After a quick night stop for diesel and letting Norway squeeze out a last couple of kronor we headed out again for the open sea. Guess that course? We had a small but cute passenger that joined us for almost 20 minutes before leaving and heading back to Norway. The first part of the passage offered stunning weather and out came the sunscreen-lotion as well as our little showerbottle (more about that in a later post), I cracked a joke about not recognizing the North Sea since last time I was out here  and everything was fine. 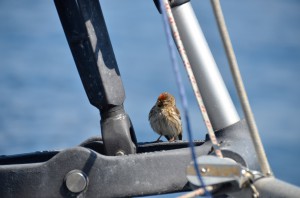 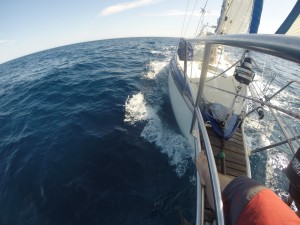 Sailing ACTION picture or something like that. At least that’s how they’re called in the brochure.

On the horizon or at least starting to show up at our zoomlevel in our digital chart was the dreaded drilling rigs for oil and gas. Big things that make your radar crazy off all the metal angles and bringing with them their guard-dogs (their tender ships) that hunt small sailors as they close in bullying them and herding them like cattle-dogs. But who could have imagined that if you do a great-circle line from Farsund to Inverness you actually go between them if you keep your course (hehe 265 something) and don’t stray off to much.

It was around this time that the first dolphins visited us, preforming a nice little show before splashing of towards the horizon. Later that night in the dark they haunted us again for over and hour and a half playing around our bow wave jumping and making noise. I say haunt because the chapter in my book was exciting and I had to put it down to look at the show..
The dolphins playing around in the dark so close turned Martina into a giggling 4 year-old, not that she cared about dolphins earlier and she was rather surprised about how they affected her. Of course as always you forget grabbing your camera but that is going to change now, our gopro will have its own “easy grab place” in our doghouse. 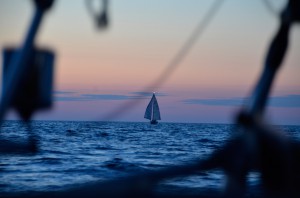 A night at sea.

Finally the North Sea turned back to how I remembered it, foggy, foggy, foggy and yeah you guessed it foggy. Soon we were in the middle of the oil/gas fields, seeing about 10 meter in any direction, relying completely on modern technology letting our AIS and radar work for their money. Our AIS plotting looked a bit crazy for a while, needless to say one had to keep awake and focused while trying to get one pin point away from you while not making all the others point towards you. It’s a game I rather not play without the equipment we have on board, at least not in the fog.

Land ho!!
Martina earned an extra mug of rum when spotting Scotland in the mist and fog while approaching Fraserburgh so Momo could fuel up on diesel. Steaming westish along the north coast of Aberdeenshire was beautiful as the fog lifted and it felt good being close to land again, then the wind and tide shifted. All of a sudden it was a slugging match against wind, waves and the tidal-currents as the dark fell over our little bubble of the world.
Pounding our way towards Inverness we run the engine at the normal rev. 2000-2200 and were soon down to 1,8 knots over ground. I think we did ’round 4 through the water and it felt quite depressing hunkering down in the dark with my book, at least there was no dolphins disturbing the plot this time. 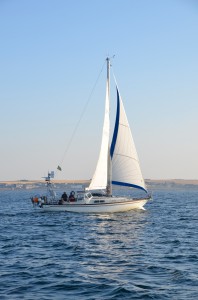 Aberdeenshire and Momo in the evening sun.

After a long night the bad times lifted and in came our friend, the fog, again.. and Mr Radar had to work again..
The approach into Inverness in fog I’d never dream making without digital charts, AIS and a radar, it would have ended up with us sitting on a sandbank eating lunch while waiting for the tide to turn or the coastguard to show up, witch ever happened first.

Rounding the lighthouse at the same rev as earlier that night (remember us doing 1,8) we did at a stunning 7,5 knots while being joined by dolphins, it was like something out of a disney movie but with no singing crabs. Our first real look on the Scottish countryside confirmed our prejudice about how it would look, fluffy greenish and small houses that dot the countryside while the ling-patches threw purple streaks amongst the green and yellow fields. 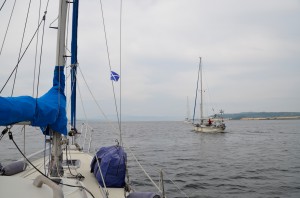 Our Scottish flag as we approach Clachnaharry lock.

Under the bridge and into the lock and we had made it to the Caledonian canal only to be yelled at by a grumpy lock-keeper who told us to monitor channel 74 so we didn’t have to interrupt his lunch. Right before entering the lock Martina drew a Scottish flag to show our respect going into port.
Going up the lock was nice and we found our berth at the Seaport. After a shower and the berthing scotch we were like new people as we headed out for fish and chips and a lager or as it’s called here, beerbattered haddock, but that is a discussion we’ll take an other day.

I’ll leave you with a picture of Onionsoup with all the right sides. 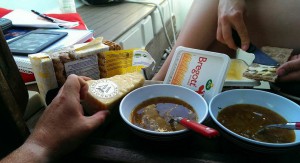 Onionsoup with the right things next to it..