Leaving Coruña heading west, actually getting some wind in our sails, although we try to only move Trusty a couple of hours each day. That way we have time to get some sun and swim a bit. The first night we anchored in a small cove, though being cosy it had a bit of a swell-problem. People talk fondly about the ocean rocking you to sleep, but try having the waves rocking the boat so you almost fall out of your bed. Fun, right? 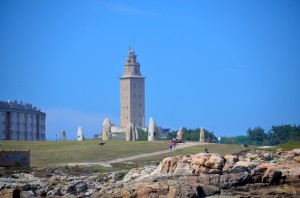 So we didn’t get much sleep that night so we set off the next day heading southwest down to Laxe, a small town by a wonderful beach. Anchoring in the bay, we were sheltered from most of the waves. Trusty was almost still the whole night and we all slept well. The town seemed a bit off-season lazy and relaxed and after stocking some more canned-beans, albondigas in sauce and strange looking meat-stews we spent the rest of the day on the beach.

Sitting on a beach is fun and games but it brings a new enemy as bad as the saltwater: the sand. Well sand is no problem, I love spending the days at the beach when I’m in Spain, the normal charter tourist say, you just shower and throw the towels for the maid to pick up when you get home. Well, when in a yacht, and not a big one, there is no shower. The only shower is the sea bearing the boat. 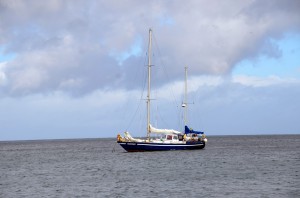 There is no house-cleaner to collect your towels and you’re stuck with sand all over the place. Sure it’s just bringing out the vacuum cleaner and clean, right? Erhm, we don’t have one, we don’t have power for one so we’re stuck with the sand, until we clean it up by hand that is. (Note to self, next time I’ll have a boat with a room for sandy salty clothes that I can rinse with a hose: a sand/salt lock)

Well after spending a day in the fresh air and getting a bit of sun on our pale bodies we headed south towards Playa des Rayes, it’s a small beach in Ria de Camariña and according to some guide websites it’s one of Spain’s top ten beaches.
Sure, it’s cosy and sheltered and you’re all alone so I can see why people love it but it wasn’t that spectacular. Best one so far but a beach is a beach, it’s full of sand, full of sand lice and you have to walk into the water. I hate walking into water, jumping is so much better. 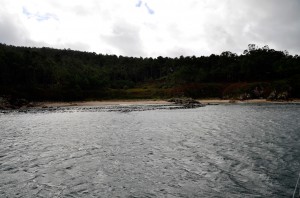 We’ve been tagging along another Swedish yacht called Fairwinds, they have the same background as us, Swedes working in the restaurant business in Norway, so we feel quite at home with them. They are heading for the Caribbean as well but are going to take a different route. Right now they are a bit shorthanded but will get a full crew at the end of the month.
Fairwinds have a curse, a dingy curse… Recently they lost their third dingy so we’re planning on giving them a little gift as soon as we get to Porto and can get all the parts. Right now we have a couple of projects we’re going to work on when we arrive in Porto. 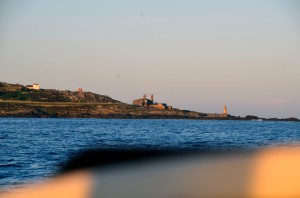 We will take pictures and guide you through our errors and successes as we improvise our way around these projects. Well maybe not the cleaning part, that’s easily solved with a hose of freshwater and our bilge pump but the rest might be fun.

We waited out the low-pressure sitting around the Azores giving us bad winds and as soon as the wind died we set off steaming down towards Porto, 30 hours later (all engine) we reached Porto, in Portugal, setting a new record in hitting fishing-net-buoys in the dark. Ok, we only hit a few and missed most by one meter or so but in the dark of the night you can’t see them coming, just hear the thump as you hit one. Not one got stuck and they all floated afterwards so I guess we didn’t do much damage. 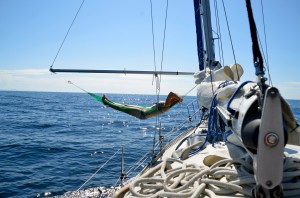 Chillin in the sun.. Trusty style..

The cruise down was nice except for all the fishing-boats lurking around the Portuguese coast with no AIS. Spotting fishing-vessels in the dark against a populated shore is not fun. There are a couple of thousand lights and three of them is a boat heading towards you, finding Nemo (or Waldo) is easier, but if you look long enough you spot that some lights are moving…
Apart from that nothing actually happened. Dolphins? Yup. Beautiful sunset? Yup. Sun and clear blue sky? Yup, at least until the next day, then it rained a lot..

So now we’re in Porto, sitting here planning our crossing to Porto Santo as soon as the weather systems are back to normal witch should be soon. I’ve been reading Game of Thrones so I guess we don’t want to stay here in Portugal for too long, because Winter is coming…..

P.S. Us girls, relative newbs to anchoring along gorgeous beaches, still quite enjoy them. (Me Per disagree, beaches are overrated, I’ll take the dinghy and a reef anytime..)