Carnival in Trinidad have a way of getting in to your head, it’s the road march competition that really make sure your head gets filled with the Carnival spirit. The winner this year was Marcel Montano with the song “Like ah Boss” (not related to the other Like a Boss song) and he sure won it like ah boss, the runner up (Marcel himself) had 30 plays at the judges stand. 360 times the winning song was played. That was at the judges stand just imagine how many times it was played during the whole day in all the carnival bands. You kind of learn that song during the day…

Listen to this song a couple of hundred times and then let me ask you: Are you more than me?

Well carnival is over for this year and now we’re just waiting for better weather to go back north up the island chain. Of course our direction finder up in the mast won’t let us go hassle free so now we have a 20-36 noreasterly right now. Got to love that. But it’s easing up after the weekend and we’ll give it a try then.

Here comes a bunch of pictures from our time here in Trinidad! 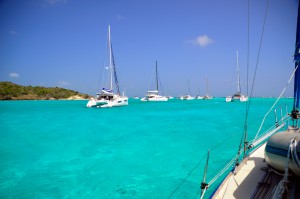 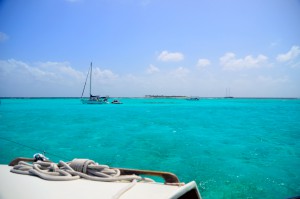 Ok we have been lazy… We’re in paradise but we haven’t moved in a bit. We’ll to be honest we kind of like it here. Bequia is nice, you got most of what you need here. Shops, chandleries, OK snorkel-spots, restaurants, pubs, bars, internet-acces and friendly people. Yeah, it’s quite sheltered as well witch is a good thing, tough sheltered means a different thing here from Sweden. Over there sheltered means you’re safe in most directions at least from the waves. Here we have the Caribbean sea right behind our stern and the next stop is Central America. But as long as we keep an eye on the weather we feel safe. We got land on two and a half sides, that is good enough.

What to tell you about islandlife then? Spains mañana feeling is more of a semaña version. One can get things done if one really put the mind and effort into those things but it’s easy to take a dip in the ocean, relax and all of a sudden the sun goes down and another day is wasted. Not really wasted but you’ve spent it and it’s not coming back.

We did find two really good things. A windlass handle that someone had left on the bottom and a shower-bottle. Well it’s not a real shower-bottle but one of those garden pesticide pump-thingies, you fill it with water and your favorite weed killer pump up some pressure and off you go. We use it as a shower, and it’s good, leave it out in the sun for a bit and you can take a hot shower. Soooooooo Gooooooooooood!
We found it floating in the bay right after a squall and being the good people we are we put a sign up on our boat next to the bottle telling people that we found it. A couple of days later and no claimers it was our. Now we’re going to have to keep a good watch over it so it doesn’t run away.

We’re actually down in Trinidad now for the Carnival and will be there for a while getting us and Trusty clean and shiny.