The GPS just told me we only had 2000 NM left witch is kind of bad.. We should have passed that 2 days ago but hey thats life.
Our last entry was kind of a downer but that’s life sometimes but it’s getting better. Yesterday after I posted we had a cupcake to celebrate being out at sea for a whole week, that lifted our spirits. A cupcake bought at the local supermarket, full of E-numbers, bad sugar and fats and colorants but it was AMAZING!! Ones culinary preferences always tend to get a bit simpler out at sea, corned-beef, spam and tincan-ravioli is almost haute cusine right now.

Today we rigged our sail back into trade-wind mode (two spinnaker poles spreading them out wide) and now we’re aiming closer to Brazil than Cap Verde at least, now all we need is 35 degrees more to the north with our course and we’ll hit the sweet spot.

Oooh while writing this it went down to 1999…
I’ll catch you guys in a couple of days and then I hope I have some good news!

I thought of making a good post today but then I woke up this morning with no wind and felt not that motivated at all. We’ll since I had something in mind I can try and see how it turns out. This is our week with some inspiration of Bare Naked Ladies – One Week..

It’s been One week since we left Mogan, set our sails up and sailed into the sunset. Six days since the awful night when we drifted around puking our guts out. Four days since that big cruise-ship, made us feel like a small rubber ducky. Two days since we sprung a leak, nothing bad but I destroyed half our candy.
Yesterday we all felt quite low and it’s still two weeks ’til we even get close… Two weeks until we even get close…

Ok so now for the explaining. After being a quite dry little ship Trusty all of a sudden wanted to start leaking again. I say again because she used to, at least until this winter. Now we’ve been sailing her with no water inside for quite a while (since July 20 to be more exact) and all of a sudden we had water in our bilges. Of course the bag that contained one of our secret candy stashes where in one of the watery compartments… Well we just pumped it all out and now we have to pump a little water out of our home every day. Like it used to be when boats were boats and men were men, I mean the good old days.

We’ll now it’s time to look outside and check for any close boats. By the way, we were passed by a big catamaran called 1 + 1 witch is a quite funny name for a boat with two hulls (19 m long 9 m wide in total that thing must have been huge). It swooshed past us doing 10-11 knots and they’ll be in the Caribbean in two weeks tops.. Bugger… We’ll at least I was the only one that didn’t puke, Martina want it to be stated to the record that it was the first tie EVER she was seasick.

It’s still quite a sail to get over the Atlantic but the distance is slowly ticking down. We’ve been out on the sea since Saturday around 16 and are now getting used to never having a steady surface to put anything down. Just living and moving around in Trusty is quite a workout and cooking, going to the bathroom and reading take a bit of an effort too.

So what have we been up to then? Yesterday night a big cruise-ship (MSC Poesia) past us after sundown and it looked amazing with all the lights in the dark. We could see it lighting up the clouds at 25 NM out and it didn’t move in the waves, just tore away at 19 knots while we bobbed like a small little rubber ducky!
Anything else? Not much, the ocean shifts color with the sun. clouds and wind-strength and the sky (when we spot it between gray clouds) is as blue as ever.
Not to shabby place to be until your realize that you have 17-20 more days ahead of you.
But I wouldn’t trade it for the x-mass food season that you live with working in the restaurant business this time of year. /The rubberduckie crew.

Well we’ve been two nights at the ocean now and the first one was really miserable. If you can think up a wave-direction and then 4 others I can promise you we had them all, at the same time..

Good thing is that it can only get better after that and so far I think it has. Right now we’re sailing southwestish and doing at least 4 knots so we’re not to bad. Sun is up and puffy small clouds linger around us.

We’ll keep you updated but I have reason to think our posts will be quite monotonic with lots of mentioning of waves, sun and wind.

One of the routes we might take. Let’s see how we’ll manage.

You ready?
I hope you are because we kind of don’t feel like we are. Well of course we are ready to sail out of the harbor and set sail for warmer waters but one are never really ready for it. Yesterday I sat down and tried to figure out what we had forgotten, nothing obvious came to my mind so I started to worry, what if something really important needed to be done. Well, nothing really come up so I started to go over my mental checklists.
Windwane: Everything moves smoothly, moved the lines a bit so we got new friction points.
Water: 112 L in bottles, 190 L in the tanks and a bit more.
Food: The whole boat is stacked with tincans and dry stuff. Even got our secret candystorage filled up.
Diesel: Getting filled right before we leave port.
Rigging: Checked it over in Porto Santo, sent Ida up the mast to check for any visible problems
Power: Fixed the towingline for our generator, greased up or pivot for the solarpanel. I want a pocket nuclear-reactor, can someone invent that for me please. Preferable cold fusion or something.
Kindle books: Bought a couple of new ones and stole some more of the worldwideweb so I’ve got enough words to keep me going a year or so.
Icebergs: Checked with NOAA and they’re acting normal up there in their territory.
Music: Check!
Shower: Took my last proper one for a couple of months…. When I get over the ocean I’m allowed to shave again. I’m going to be honing my straight razor like crazy during the crossing.

So I guess we are ready for this then. What will happen with the blog, you might ask. Easy, we’ll email it with our position and how everything is going. Maybe some fun facts or remarks about things that happen during the crossing. The weather looks quite fine and we’re ready to go.

Meet you on the ocean!

Apparently after a month of not working our directions finder jumped into life again after having pointed out where we’ve been. 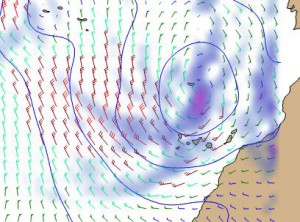 Just look at the picture to the right, that’s the weather-forecast for our part of ocean in a couple of days time. Fun? Not really but we’ll have to stay a couple of days longer being a part of the backdrop for selfies and group-pictures taken by vacationists.

Right now I’m parked at a table in a local Irish tavern drinking Guinness and thinking about what the ocean might hold. I’m over my scare of icebergs for now, if an iceberg would be close it would melt quite quick right now and I’d probably feel the chill in the air before hitting it. It’s going to be a long haul this one but we’re ready, Trusty is ready and we food enough for the trip so we’ll be fine.

So to explain, sure we could sail tomorrow and probably just have an uncomfortable sail the coming week but what’s the point in that? Why bother if we can wait until Saturday and bypass the problem. We’ll keep you updated on our departure.

Sorry for not updating in a while, we’ve been kind of busy doing nothing.. Well not exactly nothing since we’ve been shopping, doing touristy stuff and well that is really nothing but we’re soon heading of over the pond. I know I promised a big post with lots a pictures from papagayo, our sail over from Lanzarote and such but the internet connections in the marinas where we’ve spent our time is so bad it’s ridiculous. One can’t even load the frontpage of for example facebook without having to go out for a walk while the topbanner loads.

Just to give you an idea about what we’ve been up to I can sum it up for you. Martina’s mother has been here for a week and we’ve been playing normal tourist for a couple of days. We took a ride around the mountains and the coast of Gran Canaria, took a night out in Maspalomas witch a strange place. I mean if you go to another country to have a vacation from your boring life then why go to bars that serve the same food, read a menu in your own language and meet all your friends from home. Sure the Norwegians can’t spend a week away from their beloved Grandiosa but come on, heading in to a bar called Uffes Pub eating Swedish meatballs while in spain is just wrong. Being a kind person as always I noted that every country is a sinner so I will point a finger at all of you. Paddys irish sportsbar (next to the beach, serving fried fish and chips and Guinness).. Lille trollet (now serving ribbe and fårikål)… I can make the list go on for miles.

After realising that tourism is strange we decided to shop food enough for an atlantic crossing and start planning if for real.
So in a week or something we’ll head out on the great blue. We will try and do short updates on the blog about how it’s going and our position and such. As soon as I come across a place with good wifi I’ll make a picture gallery with a lot of pictures from what we’ve been up to.

Writing this post we’re anchored in a bay outside a couple of charterhotels looking at a beach full of people turning from pale to reddish pink and just trying to get our focus back.
You sail down south and now there’s not much left that we can do but to let go of land and take our 2600 nautical miles (4815 km) little jump towards the Caribbean.

We have also made two firsts hoping that it was the lasts as well. Let me explain.
I’ve fallen off Trusty.. I fell between the dock and Trusty and banged my head a bit. That is something we don’t want to repeat as we’re heading out on bigger waters. Second first was that we goofed up and put a rope in our propeller. Having a ropecutter on the propeller shaft saved us but it was a first that we rather not do again as well.

We’re chilling in Pasito Blanco on Gran Canaria and are doing some touristy stuff and preparing for our jump across the Atlantic ocean.

We’ll give you a long post about Lanzarote and the small crossing over from Punta Papagayo to here.
Be back soon.