In the morning of our departure we set out towards the breakwater of Dublin bay after calling up Dublin VTS on channel 12. We knew there might be waves, we knew there might be wind but we didn’t really expect what met us. In the shallow waters of the bay the waves towered high (at least that’s how it felt as I stood next to the mast hoisting our mainsail) and the wind blew salty gusts of seawater on to us when we clang to Trusty and double checked our lifelines.
It wasn’t that bad in real life but one should never make a good story bad by sticking to the truth. 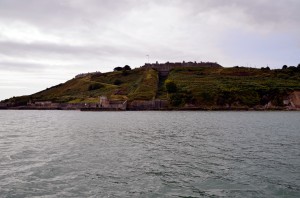 So south we went doing or best to stay cheerful as the Irish Sea hit us with waves, wind and tidal currents. Deciding that we would stop for a couple of nights in Cork we had a good run down the coast although sometimes doing what felt like 5 knots trough the water just to look at the same lighthouse for hours and hours.. Passing the two forts heading in to the Cork bay was pleasant and as we navigated in to Crosshaven we felt like home again. Crosshaven is so much better than Dublin in my opinion, well to be honest we were kind of in the most boring part of Dublin and just the walk to and from the marina was a real soulkiller. Moored up in a marina in Crosshaven it felt cosy and if it weren’t for us wanting to get a bit of tan on our pale hides we could have stayed there longer. Well after restocking our moral-boost candy and eating our final fish and chips for a while we headed out again on our quest for sun and warm waters. 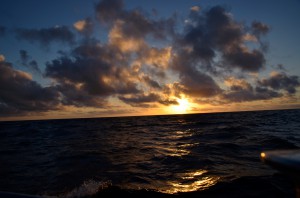 The first part of the leg was nice. Steady winds from the west that gave us good speed and comfortable waves as we headed down the Celtic Sea towards the English Channel and Biscay. The first night and the first day was kind of the same. Sailing, motoring a bit when the wind died, set sail again, reef down when the wind picked up again and repeat. After the second night the wind died completely at dawn and the sea was calm. The big swells were there but no small waves and no wind at all but instead the sun greeted us. Finally, we thought as we headed southish aiming for Spain, the sun has come to greet us and will follow us all the way to the promised land of rhum and reggae tunes. 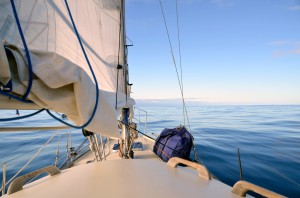 Well we had sun, dolphins, whales, sharks and no wind for a whole day but after that the sun abandoned us for some other place I guess. As we looked towards the sunset, the shipping lane loomed closer and closer and we knew we had to pass through it. Waking up the next morning the calm still sea was gone. Now we had an east-south-easterly gale hitting us with at least three different wave patterns spraying Trusty and her crew with salt and wind. It took us a whole day bashing through the waves to get from one side of the shipping lane to the other and sometimes it felt like our lady got beaten up by a heavyweight slugger.
We all felt relieved when the shipping eased up and we could point our bow a bit away from at least one of the wave-systems and stop the constant hammering. 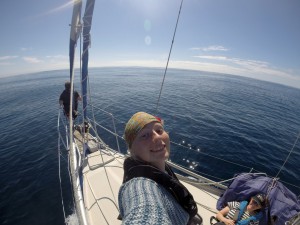 After that it was smooth sailing and then smooth steaming the last bit down to Spain. As the fog lifted we spied the Galician coast far out in the distance, finally, land, we cheered and burned some more fossils as the wind-gods looked at some other sailor in need.
We might want to make a sacrifice to the ocean-gods soon, any fair virgin who we can throw in to the sea? None? Hmm.. wonder if some alcohol and bacon will do. I’ll have to google that I think..

Coruña is a nice place to stay a couple of days. It’s warmish, even though our boat neighbours say it’s the coldest place in Spain, quite cosy and the city is living at night giving it a more homely feeling than Dublin. A man on a boat from Holland looked at me and commented on my pale figure, why so pale in Spain, he asked. Well, I replied, we’ve been in Scotland and Ireland for a month now, this is the first time I’ve worn a t-shirt in a long time. He laughed and reassured that as soon as we started heading south from here it would change.. 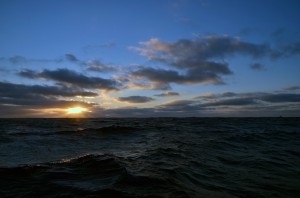 So, I leave you for a bit and we’ll tourist a bit here and I’ll make a post about biscaya, ais and reefing for dummies soon.