Sorry it’s been a while since we updated. Being in Dublin kill my creativity, the rain, the harbor, the constant butchering off decent music by all the pub musicians just make me drink Guinness or hide under a blanket. I mean what the f* is up with all this bad music, in my world all Irish people can plan at least 4 instruments, sing in key and do riverdance while sleeping. My view on the world is crumbling….

So the Irish sea then? We set out in a gale and hoisted our main with two reefs in it. That small piece of sail pushed us with an average speed of 6-7 knots all the way past Isle of Mann. We had panned maybe looking at Northern Ireland but as it just swooshed past we decided not to. Rather we forgot about it and all of a sudden we had passed the border. 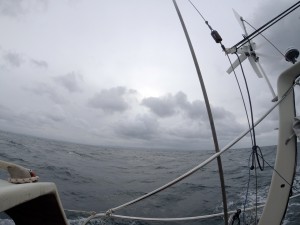 Northern Ireland over there in the distance.

Coming down the coast in the early hours of the morning we came upon a massive fleet of fishing-vessels doing a small dance for us and our AIS locked crazy again. Thank god for the AIS system again, without it we would have had an tougher morning then we did. Even tough they couldn’t make up their mind on what to do and we had to make constant course alterations. 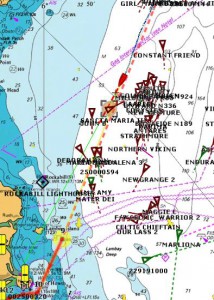 Dublin has been almost fun and we’ve met a lot of nice people, people that we wouldn’t have met if we hadn’t been sailing. Ida, Pers sister, stepped off a plane and she’s now a member of our crew (we really need to sort out the crew section of the blogg soon) as we now continue away from the rain trying to outrun hurricanes, autumn storms and all the nice things that the northern part of the north atlantic has to offer from september and onwards.

Right now we have a backlog of comments but we’ll reply and sort through it when we get to spain. We’ll be heading out to see this week so we’ll just update with position and how it’s going until we reach la Coruña.
Here is a pic of the next leg.

Next leg towards spain.

By the way, no icebergs yet but I know they’re lurking somewhere close..