We’ve been in Oban for about a week now and it’s relaxing and a bit slow. Our leaking window killed our navigation computer and now I’m waiting for the people at MaxSea to open up the licenses again. 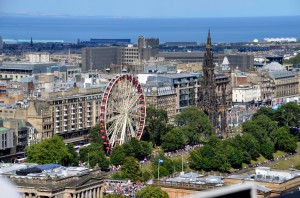 Edinburgh. Between the church and the wheel is our hotel.

So what have we been up to then? Well we dropped of dad in Edinburgh and took a hotel-night there to just relax and see the town. Visiting the castle and admiring the beautiful city was nice in the sun. Yes, you read it, sunshine, we actually had a really sunny day in Scotland. Apparently we were in town as the same time as the fringefestival so the city was lined with performance ar,t improv-comedy and well, you get tired of hearing “Come and see the best comedy in the world, this will change your life” everywhere you went. My life is fine as it is right now and I don’t think seeing some improvised show will be giving me the money to sail indefinitely so count me out.
In the night we walked to the underbelly of the city and found Brew Dog pub witch was fun. As one enters the door you’re greeted by a sign explaining all that’s needed to know about the pub.

No live sports!
No fotball!
No shots!
No stella!
But we do have boardgames…

That kind of sums up what a brewpub should be all about. We ordered all the beer they had on tap and sat down and started tasting (it was just 1/3 pint glasses). Once we completed that I went to the bar and got us a bottle of Abstrakt and we ended the night with great beer and walked home through the streets of Edinburgh dodging small groups of comedians, living statues and French rollerbladers performing something strange and well artsy…

Bertha the hurricane (what’s left of her) blessed us with rain last night and wind today so we’ll sit here in the marina and wait the email from MaxSea as we listen to the wind howling.
At least the window is almost leakfree now. Per and half a tube of Silcaflex almost sorted that out and now its just impoving that seal, if that doesn’t work it’s gaffertapetime.