A feature that few know about is that Trusty has a big arrow on top of the mast always pointing towards the next waypoint, guiding us towards our goal (where ever that might be). Wow what a good thing you might say, how does it work? Well, I would answer, it points to where the wind is coming from. Oh, you’ll say, pondering a bit and then look up into the rigging, that’s not very convenient. 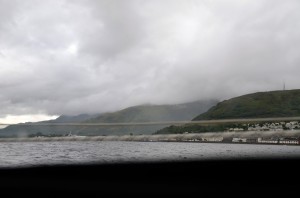 Ben Nevis, and Fort William in its natural habitat.

Steaming (I’ll say steaming because I’m get tired of writing motoring) out from Corpach (Fort William) and setting course down the almost fjord-like sound towards Oban we’re of course greeted by the wind being herded by the mountains to show us what direction we should be heading (I promise the wind turned as the bay turned).
I’m starting to realize that this will be a costly part of the sailing, soon we’ll have the wind on our hindquarters and sailing will be smooth and nice, until that we’re going to have to burn some more fossils. We had the most British lunch so far motoring in the beautiful fjord. (tea, bacon, beans, egg and branston) 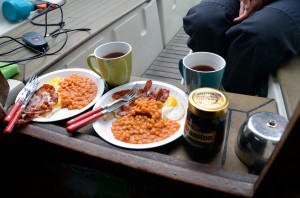 We ended up in a small bay anchored a bit out from the shore with a beautiful landscape as a backdrop for our dinner (meat, potatoes, carrots fried in a pan with a tin-can of chopped tomatoes over it) as wind died. The water was almost like a mirror and the sun came out and painted the hills and mountains with yellowish green as we sat there in tranquility, if it hadn’t been for the screaming birds hovering the fish-farm 100m away. It wasn’t even raining and there we were in an oasis of calmness getting stressed out by birds constantly screeching messing up the evening. Scenery 5/5 sound pollution 10/5. 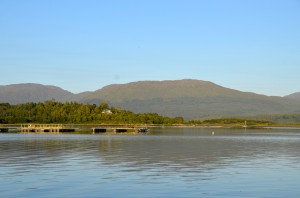 It took us ‘round two hours “steaming” from our small cove in to Oban where we moored in Oban Marina, on a small island across the bay from town. Here we have a slip and a small restaurant where we had dinner and beers. Beer might be one of the more important liquids (except water and diesel) on Trusty; having worked in brew-pups for a while really opens up the concept of beer actually having flavour. So far, the Scottish beer we’ve tasted have been bland and watery. In Inverness a local pub served us Fosters when we ordered a pint as we dropped in for a quick one (I saw that they had better stuff, ales, stouts and porters, but those were for the locals not tourist, idiots like us). Now as we reached Oban that changed; The Waypoint, a small pub looking quite unpolished in our marina had craft beer with familiar flavour. Beer from the Isle of Mull, beer from Oban bay and well, beer that we liked. Now we’re back in business again and I think Trusty will float even lower after we’ve acquired a couple of litres of the amber liquids… 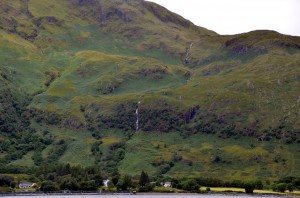 Mountain stream in the Scottish countryside.