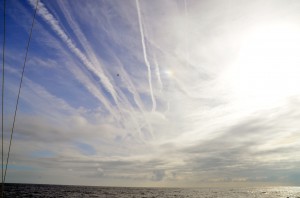 But now we are just right, there are Germans, Spaniards, Englishmen, French and I actually think I heard Finnish or Danish, hard to tell when your mind is set to grasping Spanish and English so that when you hear something you should recognise it sounds like complete gibberish.
But yes we’re in charter-land!!!

Anchoring in a bay outside a beach where you’re joined by glass bottomed boats, catamarans ferrying tourists and bathing toys to the beach and lots of other boats gives you a bit of an assurance. It’s a way of proving to yourself that the choice of anchorage you’ve made is a good one. Not necessarily a safe and calm one but a nice place to bathe and get your tan on. Being between 24 and 26 C in the water helps when you want to check on your anchor or just look at the bottom of your keel. Being anchored outside a lovely beach looking at all the people tanning and playing in the surf make you feel a bit of proud, I’ve taken this yacht here it was far and I can stay here for a couple of weeks and you guys on the beach are taking the disco-catamaran back to your hotels in about an hour. Sure, you might have your air-conditioning, showers, room-service and hotel pool-bars but you’re going home next weekend and I’m continuing my trip. 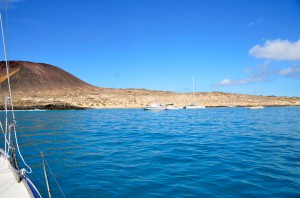 Playa Francesa is a well-sheltered bay in all conditions except in south-to-south-westerly winds. Ok hard west winds can be a bit of a hassle too but most of the time the trade winds stops that from happen. Except for right now, the winds picked up and we were in a rollercoaster. 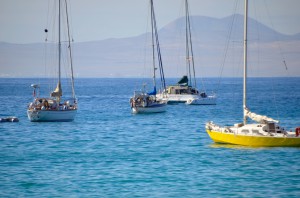 Anchorage.. you’ll be seeing more of these kind of pictures.

Well no worries, we just pop into the marina and spend one night there, stowing our dingy, up with the anchor, tuck the teapot into its hiding place and away we go. Twenty bumpy minutes later, we were heading into the safe harbour and all of a sudden there it was, the iceberg of my nightmares! 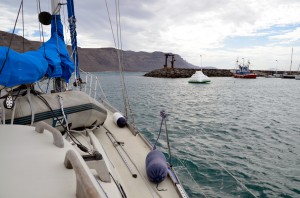 Seeing it as we entered the harbour I knew we we’re in of a bit of trouble and sure, as soon as we laid our eyes on a nice spot on the docks we heard a whistle, a guy in a uniform waved us in telling us there was no place in the marina for us. It’s full, he said and dismissed us with his clipboard. The uniform he whore stated that it was no use discussing so we headed towards our backup anchorage. But I promise you it was that effing icebergs fault. I hate icebergs, I had nightmares about them before Scotland and now they’re here to haunt me, to taunt me, to just give me a hard time.. 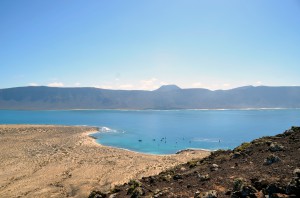 From the mountain.. Not bad, not bad! 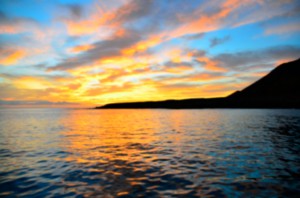 What the sunset looks like when I’ve misplaced my glasses.. Graciosa it’s not that shabby..

We plan on heading down to Punta Papegayo in a couple of days and hopefully we’ll bring you that story soon.